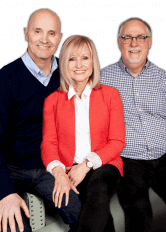 FamilyLife Today is a daily half hour program that  provides practical, biblical tools to address the issues affecting families in today’s world. You’ll hear in-depth interviews with noted authors, experts and pastors. Hosted by Dave and Ann Wilson along with radio veteran Bob Lepine, FamilyLife Today provides “Help for Today, Hope for Tomorrow” with encouragement and resources to effectively develop godly marriages and families who change the world one home at a time.

Trusting God with Your Barrenness

Author Heather DeJesus Yates talks about her deep longing to have children and the disappointment and despair she experienced struggling with infertility. After years of trying to get pregnant, Yates tells how she came to realize that God wanted to rescue her from a small story so that she could participate in His bigger story, if she would just trust Him. Yates reminds us that Jesus offers us empathy for our pain and is the mediator between us and God. He sits with us in our struggles and gives us the Body of Christ to listen and comfort.

The Power of Affirmation

You've got power, but it's not where you think. It's in your tongue! Matt and Lisa Jacobson join with Dave and Ann Wilson to talk about the power of words in marriage. The scriptures tell us that kind words are like a honeycomb and build our spouse up, rather than tear them down. Lisa remembers a time when she complimented Matt, only to learn how ugly he felt as a child growing up. You can help heal your spouse's past wounds by practicing affirmation through heartfelt, encouraging words.

The Blessing of Affirmation

Your spouse is longing for your affirmation. Husband and wife team Matt and Lisa Jacobson talk with Dave and Ann Wilson about the importance of affirming your spouse. Many of us are good at affirming our love before marriage, but after the "I do's" we only notice our spouse's weaknesses. Ann admits that it took a long time before she realized how her negative words affected Dave, and both of them tell how a positive shift in outlook changed their marriage for the better.

Pastor Bryan Loritts joins his father, Pastor Crawford Loritts, to talk about the value of a father's integrity. Integrity, Crawford explains, doesn't mean perfection, but it means admitting one's shortcomings. To illustrate, Crawford tells a story about disciplining Bryan for something he had told him repeatedly not to do, only to find out later Bryan didn't do it. Upon realizing this, Crawford drove to Bryan's school and pulled him out of class to apologize. In turn, Bryan tells of a time when his father's response to a car accident made Bryan realize just how seriously his father took his faith.

The Headwind vs. the Tailwind Dad

Pastor Bryan Loritts, a father of three sons and author of the book, "The Dad Difference," talks with Dave and Ann Wilson about the difference between a headwind father and a tailwind father. Absent, abusive, or passive fathers are headwinds forcing their children to squander much of their adulthood undoing what their fathers did or did not do. A tailwind father, however, is a dad who is present and an active, caring participant in their child's life. He sets his child on a trajectory for success and influence for generations to come by inspiring and pushing them to their God-intended destiny.

Donate To This Ministry
Donate a Vehicle