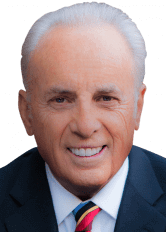 Looking at the Cross from God’s Perspective (#2)

The story’s told of three workers who helped build St. Paul’s Cathedral in London. Asked what they were doing, one said he was cutting stone . . . another said earning a wage. The third, though, said, I’m helping build a beautiful cathedral. Three men . . . three perspectives. Well, perhaps you’ve heard several takes on the Crucifixion over the years, like that of the apostles or the thief on the cross. But have you ever considered God’s perspective on the death of His Son?