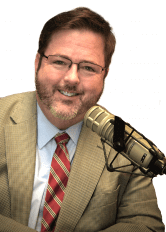 Former heroin addict and prison inmate Danny Cosby shares his journey to freedom on this episode of Mid-South View Point. Danny recalls listening to Byron on the radio from his jail cell before and incredible transformation took place in his life. Twelve years later Danny follows a call to encourage others living in hardships and struggles of life. Danny is regularly featured on Hope Presbyterian Church’s worship team and has produced a CD of his own original music. Danny sings a couple of his original works live on today’s show.